What the Little League World Series Taught Me About the Game... of Life

August 28, 2018
As a little girl growing up in the small town of Peachtree City, Georgia, my family didn't have cable television (I'm not even sure it existed in the early 1980's), but we did have a little black and white tv with a rabbit ears antenna that picked up the local TBS station when placed on the back porch. Every night during the summer, I can remember my dad watching and "coaching" the Atlanta Braves along through the small screen. If only Dale Murphy, Bob Horner and Sid Bream followed his advice, they might have won a couple more games back in the day.

I was not a great baseball/softball player. In fact, I only played one season when I was in 6th grade, spending most of my time in left center field picking dandelions inning after inning. I did get to pitch in one game, but succumbing to the nerves and not being able to see straight with my heart beating between my ears, I walked 4 batters in a row and was taken out of the game. When it was my turn to bat, I prayed for a walk, figuring that if I could get on base, at least then I would have a shot at running fast to help my team win the games.

While softball was not in my athletic calling, rooting for the home team would always be in my heart. So, when a team of Peachtree City, Georgia 12 and 13 year old boys won the Southeast Regional tournament and qualified for the 2018 Little League World Series in Williamsport, PA, we tuned in to ESPN to follow them along. A bonus: our sweet friend, Beth Ryan, who grew up 2 doors down from my husband and lived with his family during her senior year at high school while her parents briefly moved out of state, son was on the team. Seeing #8, Jack Ryan's round cheeks and grinning face at 3rd base and super fit momma Beth cheering in the stands, made this dream team a bit more real from our living room viewing.

As the week progressed and the Georgia boys fought through come from behind victories to move forward in the brackets toward the championship game, another story began to unfold... a story of the meaning of true sportsmanship and playing a sport for the love of the game regardless of the outcome.

We live in a society that is so focused on outcomes, on being number one, on pushing ourselves and our children to be "the best" at every thing they do. Just yesterday I was eating lunch at Chick-fil-A and overheard a mom at the table behind me bragging about her kindergartner qualifying for the Gifted/Talented program at school and how her school was in the Top 10 in the state for academics and test scores. Later, at the lacrosse fields, a dad sitting on the sidelines next to us was talking about how he hoped his daughter would make the national team for this league even though she already was on another travel team, plus just went to the state meet for swimming, runs cross country and is one of the fastest in the county, and I can't remember what else (my brain had tuned him out by that point as my stomach sickened).

I have watched my own daughter's self esteem crumble and loose interest in activities that she once loved because of this mentality of the need to be Number 1. When we moved to Colorado, as a family we joined a cycling team that had a juniors program based out of our neighborhood. Warning signs went off between my ears when I was told that I needed to fill out forms before my races predicting my podium placement so reimbursement from the team for winning could be set aside - talk about a pressure to perform. Then, I will never forget the look on her face after my daughter's 1st race when she read the email from her coach to the team about the results and he raved about the top finishers, but didn't even mention those kids who didn't place on the overall podium. I don't believe in participation trophies, but I do believe in encouraging children and teaching them how to learn from experiences and celebrating their progress along the way.

Some people reading this may scoff and say I'm a walking talking contradiction. I'm as fierce as they come out on the race course and will fight to the end with hopes of claiming top spot on the podium. I set big goals and work hard to make them become a reality. But at the end of the day, my heart knows it isn't about being Number 1. As the motto for Huddleston Elementary in Peachtree City states on their website, the teacher staff's goal is to prepare students to achieve their personal best and reach their own potential. If you do your personal best, that will always be good enough. I am thankful for my years of being a Huddleston Hound in elementary, as well as my daughter getting to attend school there in her early years with kids like Jack Ryan who were raised with the same values. I am also grateful my parents never pushed me to perform at school or in sports. They didn't force me to stick with softball (maybe because they realized it would not be my ticket to a college scholarship early on!), take extra classes to one-up my classmates academically, or make me train in the off-season for running- I don't think I would have even known what cross training and conditioning were back then, we just moved on to the next activity when our sport was over for the season, rode our 10-speed bicycles on self-made trails in our backyard, pretending the bikes were horses racing through the woods, and staying out until dark playing kickball and capture the flag with the neighborhood kids in the cul-de-sac.

Watching the Little League World Series re-ignited a hope in me that not all sport and life is outcome measured in today's society. I watched not only our Peachtree City boys, but boys from Hawaii, Texas, New York and from around the world play the game just like they play it in the sandlots behind their schools. They were having out a blast out there on the big stage under the lights in Pennsylvania.  They made us laugh at their facial expressions, dances and jokes. They cheered and saluted their opponents when they made a great diving catch or spectacular play to get an out. There were no displays of cockiness, entitlement or arrogance. The coaches, who wore microphones so we listeners could eaves drop on their conversations from the mound were more like zen masters than the stereotypical 'in your face' coach. We heard words like "So what, they are one run up on you. Look at where you are. Have fun out here." And, "Its not about you. Its about the team. You did good. Now go have fun." Their parents, who cheered from the stands with smiles on their faces and pride in their hearts, were incredible. While we at home sat on the edge of our seats, biting our nails and refusing to pause the tv for a bathroom break for fear of jinxing the team in our absence, the boys parents took in the game just like they would at the PTC Athletic Complex on South 74.

The boys of summer have returned home to a heroes welcome in our little town. Their names, Tai Peete, Jansen Kenty, Chase Fralich, Connor Riggs-Soper "Soap", Bo, Charlie and Will -as well as "The Jack Ryan" (who caught a 200 pound shark and impressed the ESPN commentators), are as common in our house as our daughter's friends from school. Some of the players may go on to have aspiring careers in baseball, while others may look back at the days of 2018 Little League World Series as a great adventure filled with memorable moments and resume building lessons to be applied to endeavors later in life. I have no doubt they will all be successful in whatever they aspire to one day because they have the right mentality. Its not whether you win or lose if you play the game with heart, make friends, respect one another, and do your personal best.

Thank you, Peachtree City Little League baseball players, coaches and parents, for showing us what true sportsmanship and life is all about. 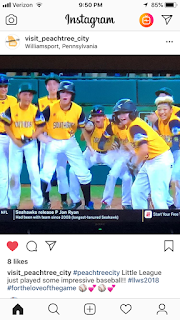 Popular posts from this blog

November 10, 2018
2017 left me with an odd taste in my mouth, not bitter, but like an ingredient was missing in a fresh batch of cookies. The cookie was still good, but lacking that savory wow factor that leaves you smiling while licking your lips. 2017 was a fantastic year from a race result standpoint. I won overall amateur at the XTERRA PanAm Championships for the 2nd year in a row, won overall amateur at USAT off-road nationals and XTERRA Oak Mountain, finished 2nd in my age group to my good friend Jennifer Razee and 5th overall at ITU Cross World Championships in Penticton, Canada, and finished up the year placing 4th overall amateur at the XTERRA World Championships. I even was named Ms. XTERRA and USA Triathlon's Amateur Off-Road Triathlete of the Year. The sugar coating on the cookie that was missing, however, was the fact that 4th overall at XTERRA Worlds was only good enough for a 3rd place in age group medal.

To bib or not to bib?

I have been told many times, "once you try bibs, you will never go back to spandex cycling shorts again." The idea is that bibs don't have an elastic waist that cuts in to your middle when you are riding your bike, which makes you feel more comfortable and free to move on and off the saddle.

Based on the encouragement of other girls on bikes to try bibs, I bought a pair a few years ago... and while yes, they don't cut into the waist like traditional spandex shorts do, I was absolutely miserable wearing them and vowed never to wear them again. Why??? Because usually I have to "relieve myself" before, during and after a ride. I remember 10 minutes before the start of my first mountain bike race, I ran to the port-a-potty for one last pre-race nervous tinkle and about fell out of the outhouse attempting to take off my jersey which also housed my phone and race nutrition (thank goodness neither fell into the depths of th…
Post a Comment
Read more

Deanna McCurdy
Littleton, Colorado, United States
I am a runner, a mom, a wife, and friend. I live life passionately and will pour 110% into everything I do. I am learning how to combine my passion for my children and running through our Team Miles for Smiles, which helps raise much needed funding to help cure Angelman Syndrome, a rare genetic disorder my youngest daughter was born with. My greatest dream is to hear her say "I love you". One day, I know it will happen. Until then, I will keep running, keep dreaming, and praying.